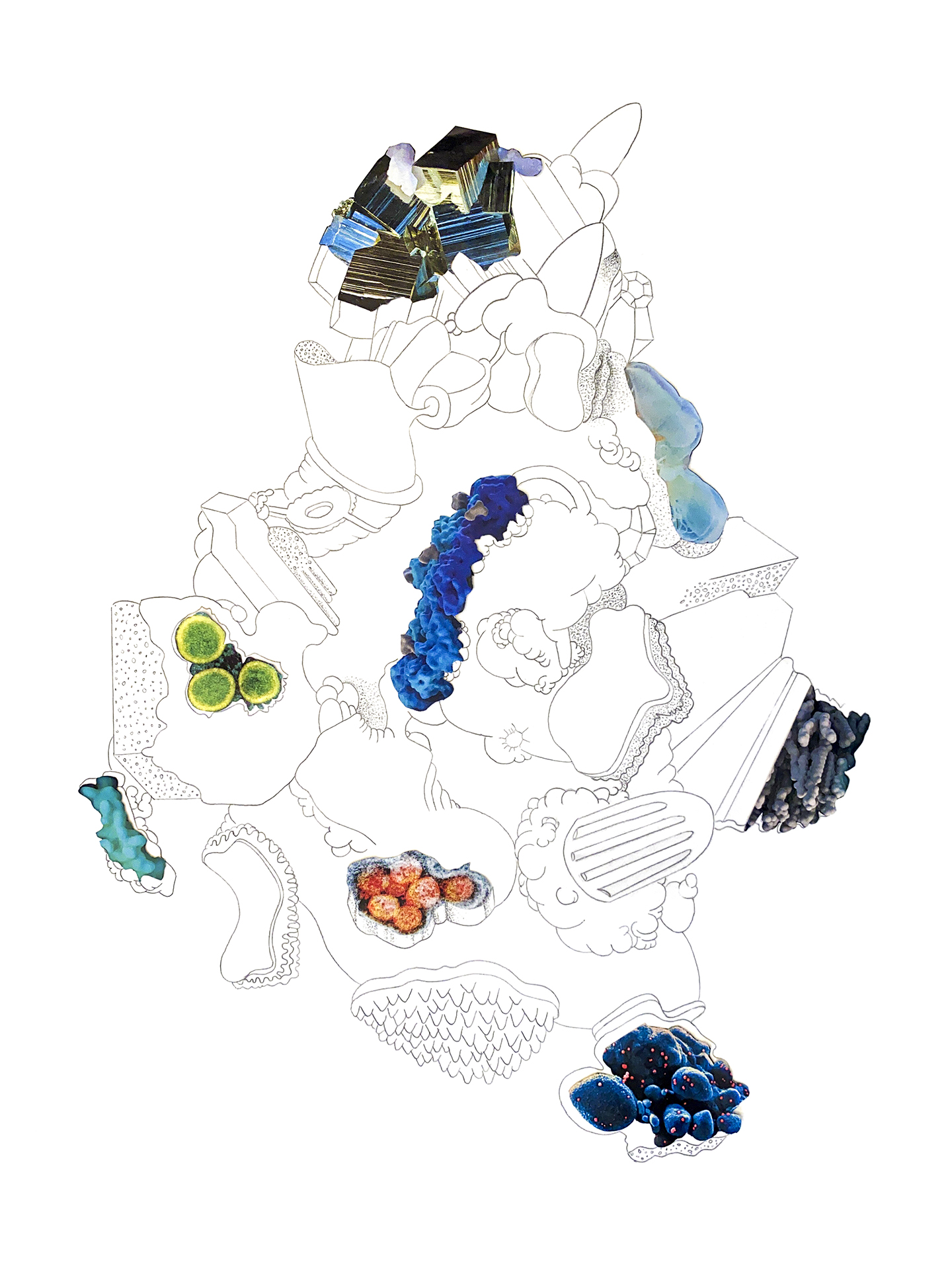 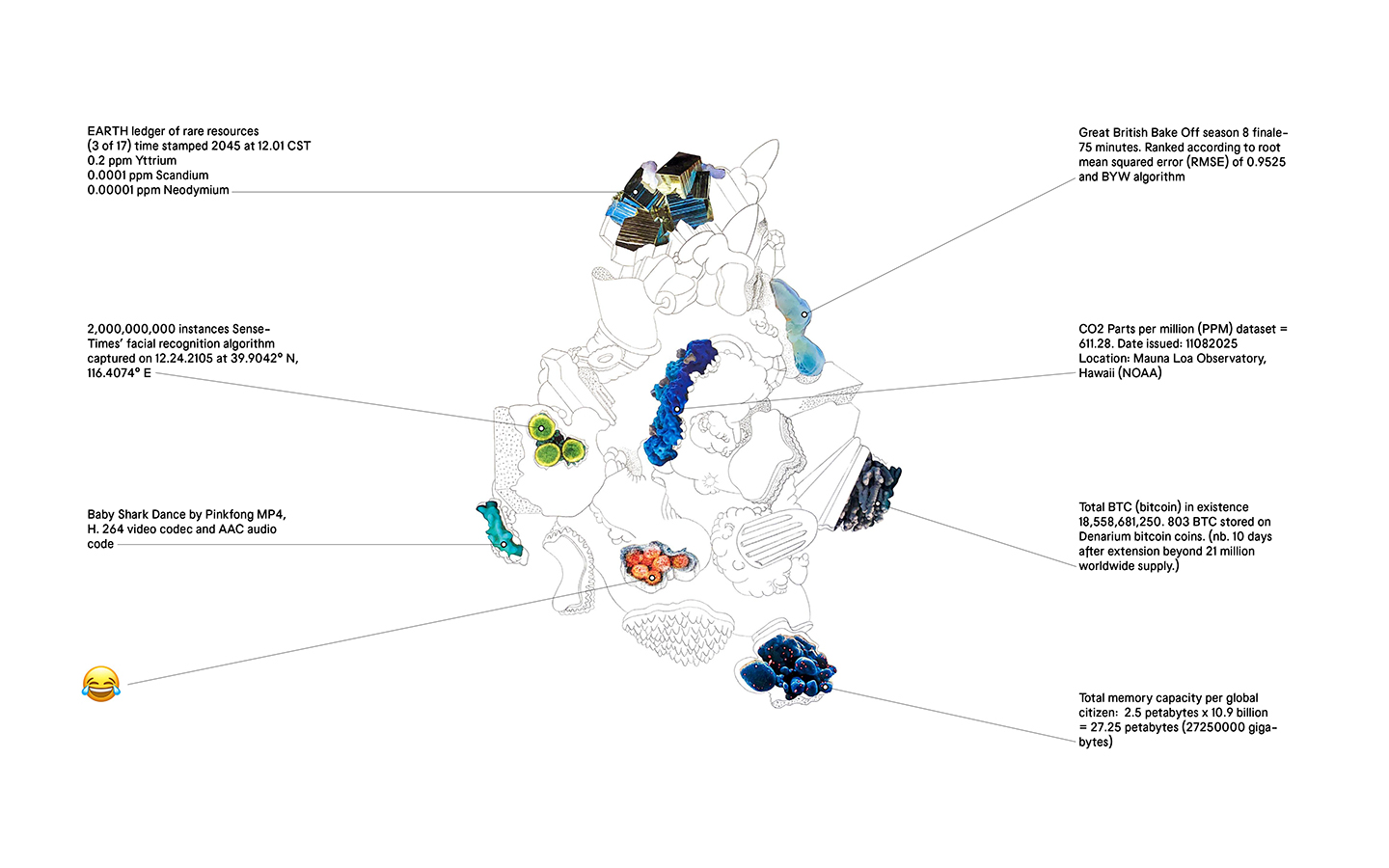 A commission from United States Artists to contribute to the inaugural edition of their new digital publication New Suns: Artists Shaping Ecologies. Their first issue titled Mapping the Horizon- centered around the question: What does the future hold? United States Artists gave us the fascinating challenge to consider what we think the last object on Earth will be. What would its final existing material shape be, and how would it function as a relic? The response had to be illustrated with accompanying text to explain the rationale behind it. Our response was entitled ‘The Extremophile Biocomputer’.

The Extremophile 1 Biocomputer 2 is a biological supercomputer that is a self-sustaining, self-replicating organism, capable of surviving extreme conditions and holding all human knowledge. As well as containing the entire contents of that most double-edged of twentieth century inventions “the World Wide Web”, and copies of all written texts, art and music, it also contains the uploaded consciousnesses of the last remaining human beings as they retreated from reality.Notably, it contains the records of the decline of human civilization, as resources were used up, fought over or destroyed, and the ecosystem collapsed. Sadly, the Extremophile Biocomputer isn’t much to look at, resembling the primordial soup3 from which all life on earth evolved.

2020: Google’s AI DeepMind predicts how a protein folds into a unique three-dimensional shape, demonstrating the potential for AI to propel advances in nanobiotechnology 4

2028: For the first time, scientists successfully program a computer using a brain-computer interface5.

2032: Advances in nanobiotechnology lead to the first living biocomputer, designed with cells as its basic components.

2128: The Extremophile Biocomputer Project is launched with the aim of storing all human knowledge in a self-sustaining organism.

2135: The wealthy elite of remaining humans create a “virtualization suicide pact”, transplanting their consciousnesses to the Extremophile Biocomputer.

1Extremophiles are organisms that thrive in conditions which would be considered extreme for most carbon-based life forms. (Wikipedia-Extremophile)
2Biological computers can perform computational tasks using biologically derived molecules. (Wikipedia-Biological Computing)
3Primordial soup refers to the mixture of organic molecules in evolutionary theory from which life on earth originated. (Miriam Webster)
4Nanobiotechnology is a term describing the merger of biological research with various fields of nanotechnology (the use of matter on an atomic, molecular, and supramolecular scale for industrial purposes. (Wikipedia-nanobiotechnology)
5Brain-Computer Interfaces translate brain signals into commands that can be used to control devices external to the body. (NCBI)
6Anthropogenic global warming is climate change that is directly linked to the amount of fossil fuels burned, aerosol releases and land alteration from agriculture and deforestation by humans. (EnergyEducation)
7A biome is a large naturally occurring community of flora and fauna occupying a major habitat, e.g. forest or tundra. (Oxford Dictionary)
8Artificial general intelligence (AGI) is the hypothetical intelligence of a machine that has the capacity to understand or learn any intellectual task that a human being can. (Wikipedia-AGI)
9Artificial Super-intelligence (ASI) is AI technology that is capable of surpassing the abilities of the human mind. (Wikipedia-ASI)
10Tardigrades are micro animals capable of surviving extreme conditions including outer space. (Wikipedia-Tardigrades) or can we use (National Geographic)